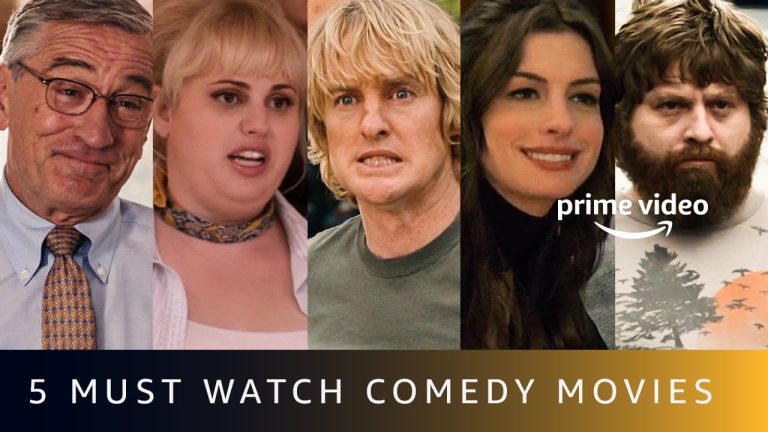 Living in the modern world requires frequent sources of comedic relief. With rising inflation, socio-political strife, and increased global warming, light-hearted movies are important. Such content typically puts people in a good mood and boosts energy and positivity. Today, there are a large number of streaming services such as Netflix, Hulu, and Amazon Prime that make it easier to access TV shows, movies, and dramas. With Amazon Prime Comedy, you have a wide range at your disposal. Here are the top 5 comedy movies on this channel that will put you in a good mood.

With modern technology, you don’t even need to be at home to watch your favorite movie. Services like Spectrum mobile plans allow you to stream on your smartphone. As a result, you can enjoy greater flexibility and convenience.

Mrs. Doubtfire is a classic, starring Robin Willimas and Sally Field. Although it seems like a simple comedy movie, it is much more layered. It explores concepts related to family, relationships, and the importance of authenticity. Robin Williams is what makes Mrs. Doubtfire truly stand out. His attention to detail and his wide range of emotions make this movie especially enjoyable. The best part about this specific film is that it can be enjoyed by audiences belonging to all age groups. This means that you can even watch it with your kids on a family night.

Big Daddy is well-known among comedy lovers. In fact, it is one of Adam Sandler’s most iconic movies. It follows the life of a man who isn’t motivated or driven enough to do anything. Therefore, he fits the textbook definition of a slacker. However, his life changes when he’s forced to take care of a child, played by twins Cole and Dylan Sprouse.

Following this, he accepts responsibility and learns how to make sacrifices and compromises. Big Daddy will also instantly put you in a good mood. With its light-hearted content and comedic dialogues, this movie is perfect for relaxation. Although this movie came out more than 20 years ago, it’s still widely watched by audiences all over the world today.

When it first came out in 2017, The Big Sick gained a lot of attention and acclaim. One of the reasons for its popularity is also because it stars Kumail Nanjiani as the lead actor. When The Big Sick was released, it still was not too common to see South Asian actors as leads in movies.

Thus, it was praised for representation and authenticity. This movie is loosely based on the lives of actors Kumail Nanjiani and Zoe Kazan. In fact, it became one of the few comedies to be nominated for an Oscar. With its easy-to-follow storyline and witty dialogues, it’s not surprising that the Big Sick still remains a popular choice for film enthusiasts.

Although Sleepless in Seattle isn’t a quintessential comedy, it has enough comedic aspects to qualify as a rom-com or a romantic comedy. This movie is a cult favorite and is often regarded as a classic feel-good movie. In fact, Sleepless in Seattle is what established Meg Ryan and Tom Hanks as Hollywood’s favorite on-screen duo. Directed by Nora Ephron, this movie follows the lives of two individuals who are stuck in their own messy lives.

They’re both brought together through a radio show when a widower narrates his heartbreaking life story live. Sleepless in Seattle is both nostalgic and progressive in the concepts it explores. What makes this movie even more special is its iconic soundtrack by Mark Shaiman.

See also  Where to Download The Conversion Movie in HD

If you’re a Wes Anderson fan, The Royal Tenenbaums is the perfect movie for you. It follows the lives of young adults who’re faced with the ultimate dilemma about adult life. They realize that all that they’ve been told about it when they were kids was untrue. This movie is about three siblings who learn that their lives are actually very different than what they expected.

The Royal Tenenbaums is especially fascinating to watch because it follows Anderson’s signature style of direction. It consists of the perfect blend of colors and frames to fit each setting and scene. Furthermore, this movie is both witty and comedic. Although it tends to follow dark humor, it’s still one of Anderson’s most popular movies.

With Amazon Prime Comedy, subscribers get to choose from a vast selection of movies and TV shows. Thus, if you’re looking for great comedies, consider watching Big Daddy, Sleepless in Seattle, and The Royal Tenenbaums. Although most of the movies in the aforementioned list are several years old, they’re both funny and engaging.